Here’s a couple very very useful POIs (points of interest) which you’ll want to learn these ASAP for your story mode speedruns and races. 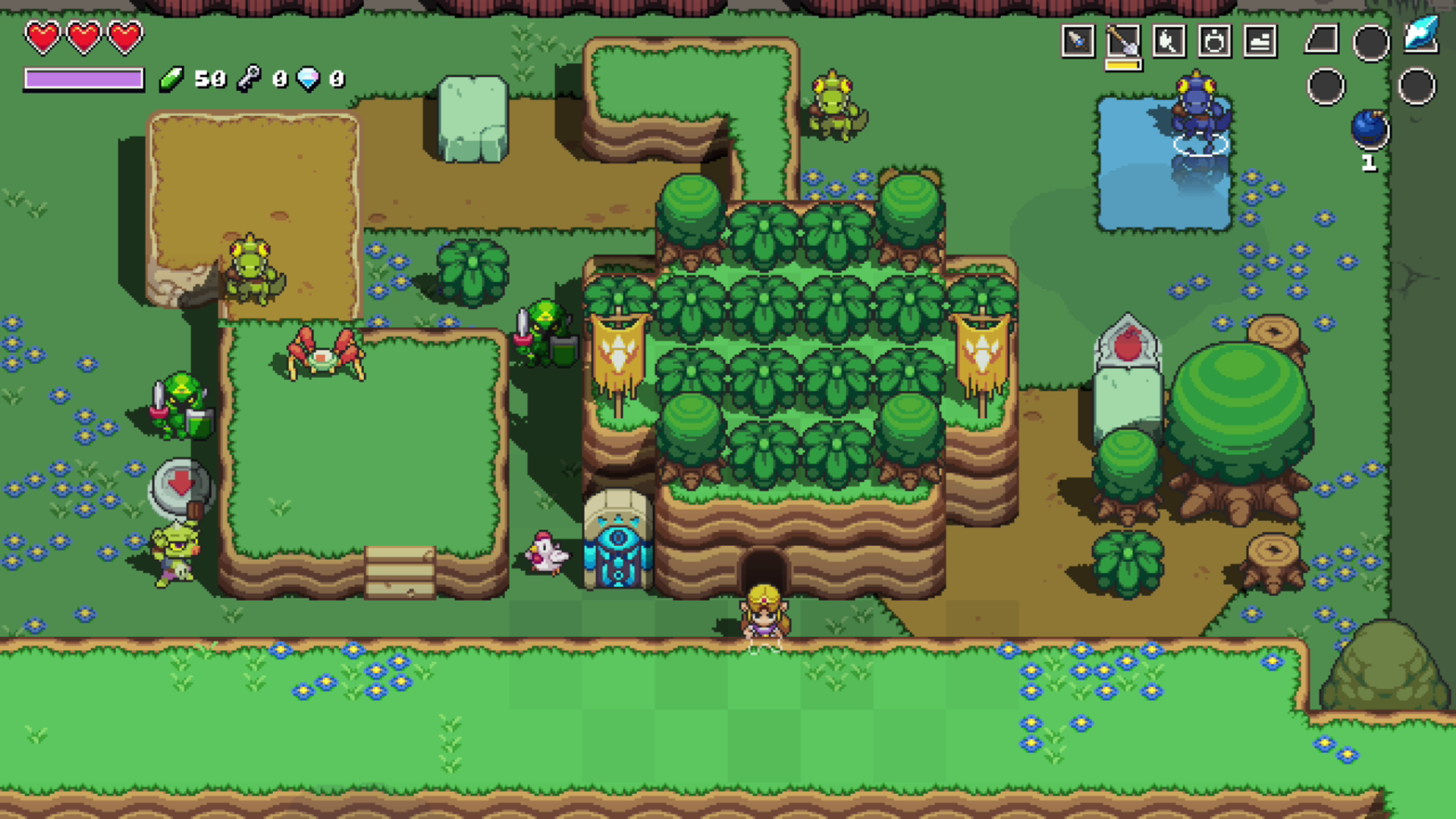 It looks like a bomb. It can be flipped left or right (so the ‘fuse’ can go either way). The sheikah stone is always on the same side of the shop as the entrance.
Note: It cannot spawn in the desert or in the beach.

Here, the entrance it on the right side, which means that the sheikah stone is on the right side as well. Keeping this in mind can sometimes help save a few steps when approaching the screen with the Goron Shop. You can also check which side it’s on when warping to it, to know whether you should start moving right or left on the 1st beat after teleporting. 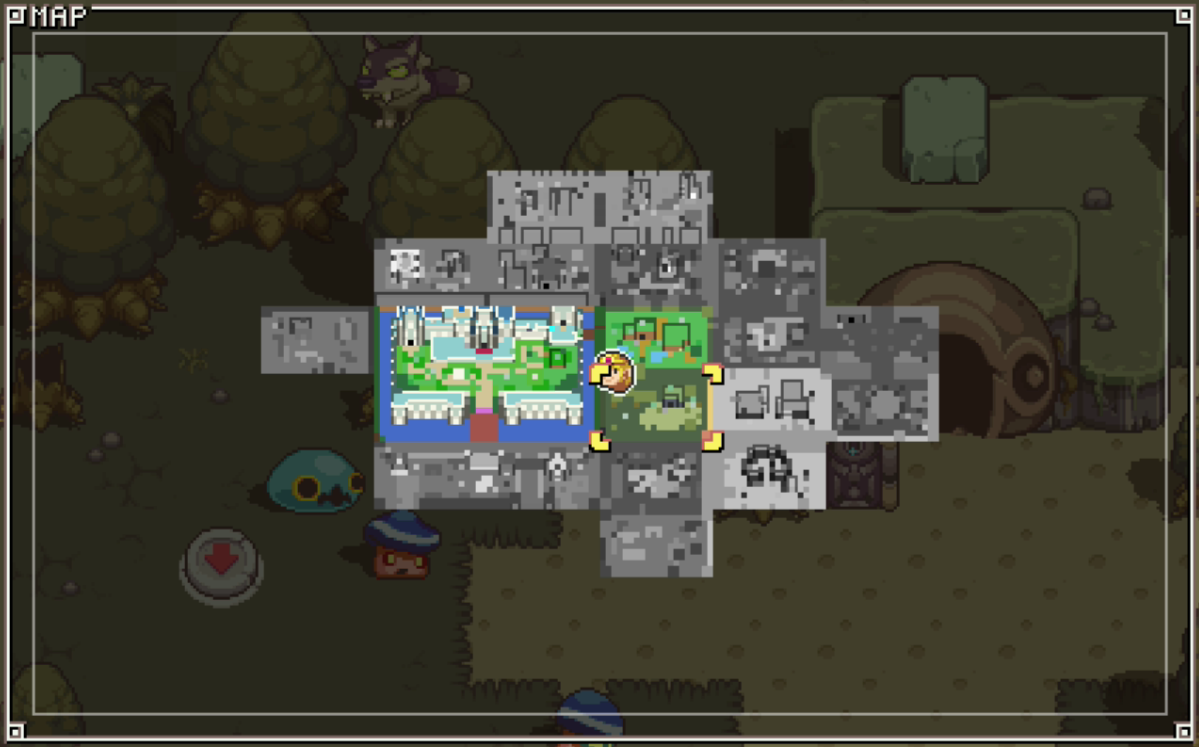 There’s a fountain with a red chest in the grassland. That red chest always has a wisdom a torch. If you see the tile and it’s not too far out of your way, you’ll want to get the wisdom torch. It will help you find good items and wall keys.

Note: The Wisdom Fountain can only spawn on the grassland. 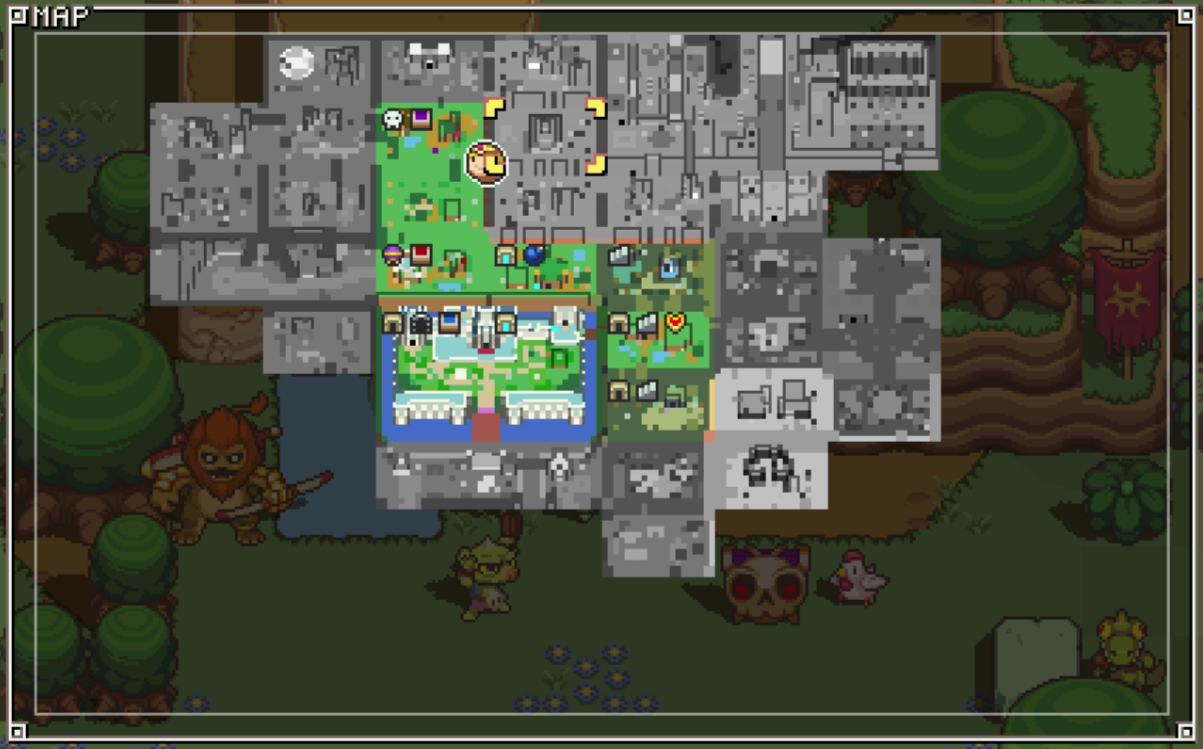 Sometimes you can save a few steps by knowing that the red chest is actually visible on the map! It helps to determine the most efficient way to approach the screen grab the torch. 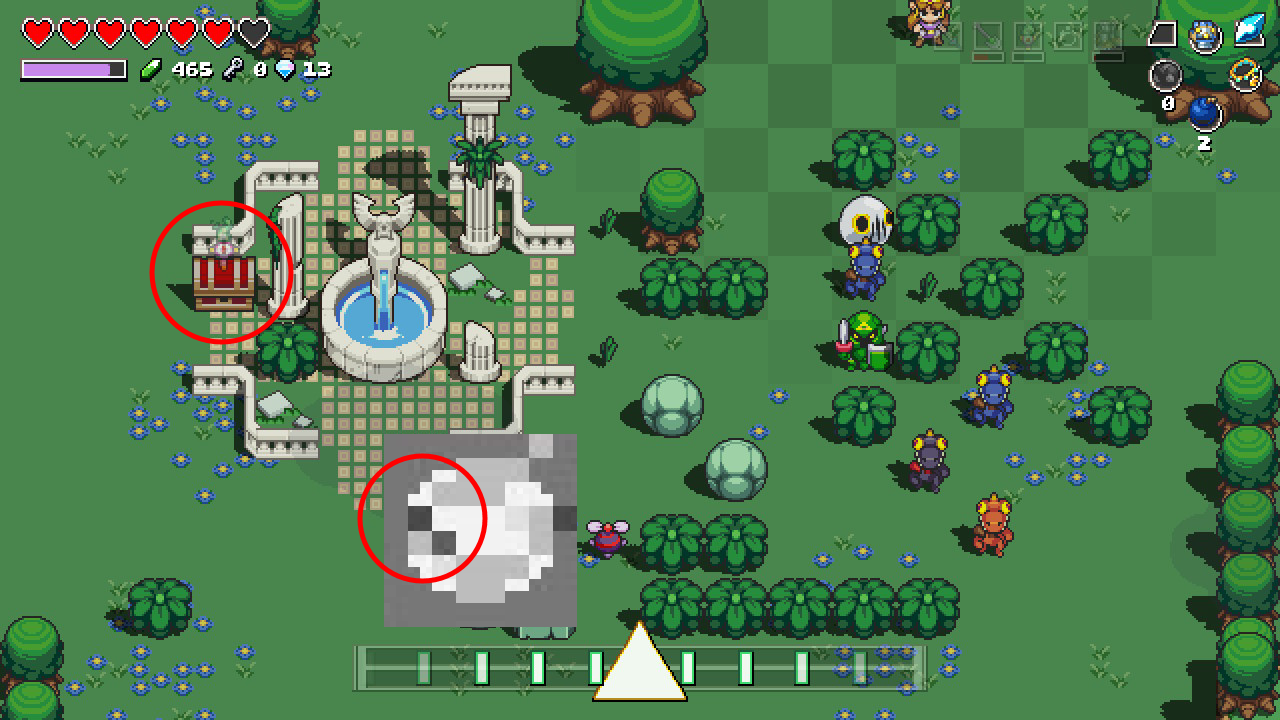 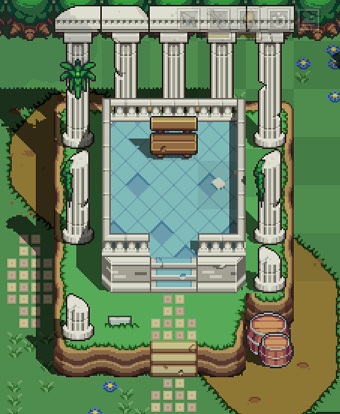 The bench! The greatest unsolved mystery in Cadence of Hyrule. It’s mystified dataminers, hackers, and speedrunners.

Does it unlock a hidden character? Is there some unknown power locked away beneath it? Why is bench

We haven’t unlocked it’s secrets and only time will tell if we ever will. 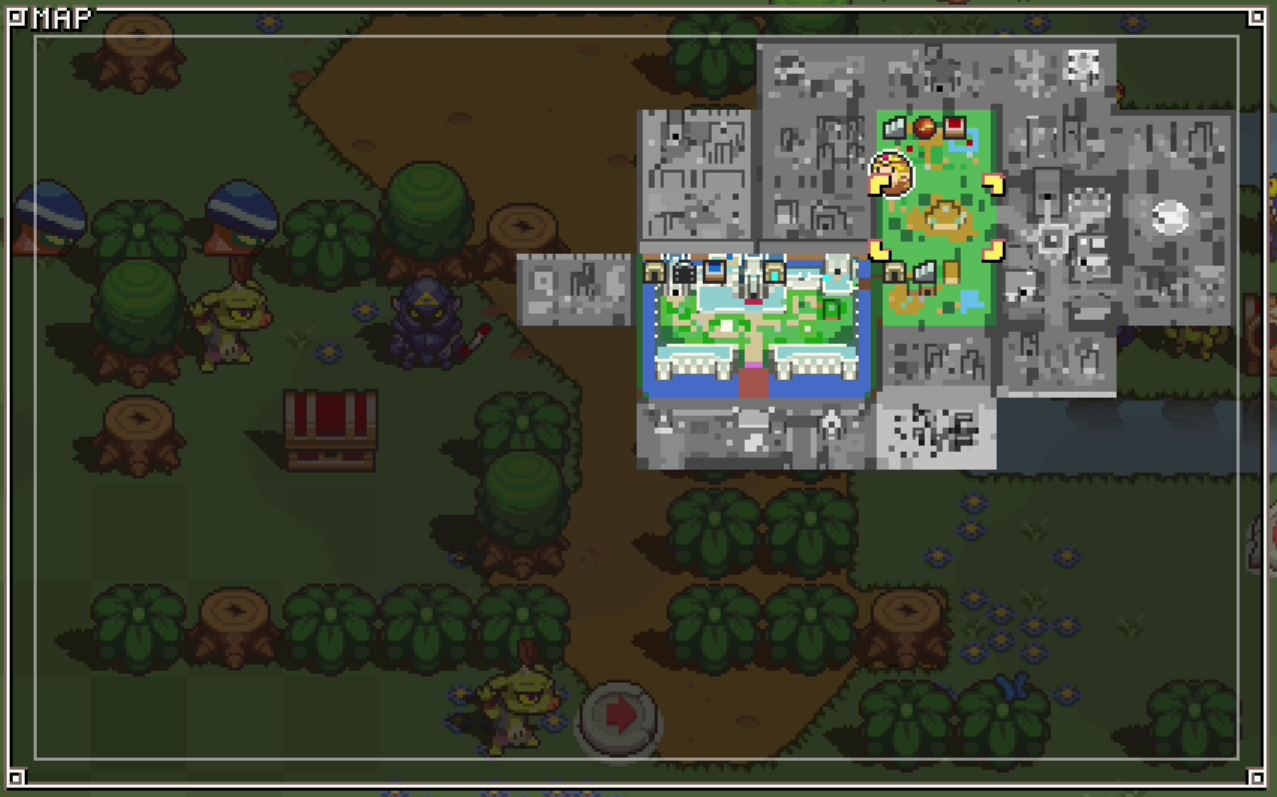 Here’s a few POIs which are somewhat useful to a speedrun. 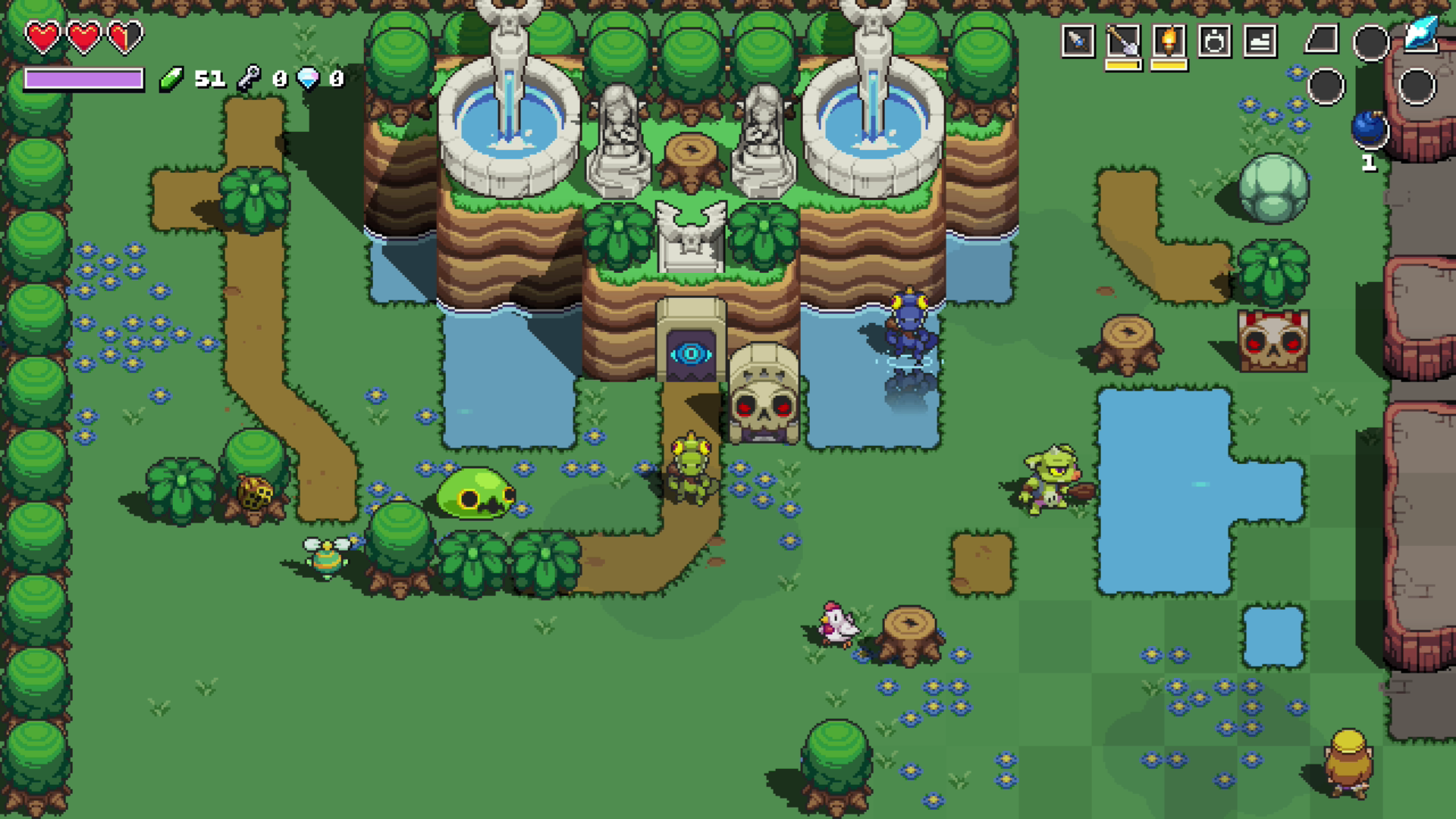 There will always be two Great Fairy Fountains. You’ll have to clear the screen to open it up.

Note: They cannot show up in the desert or the beach. 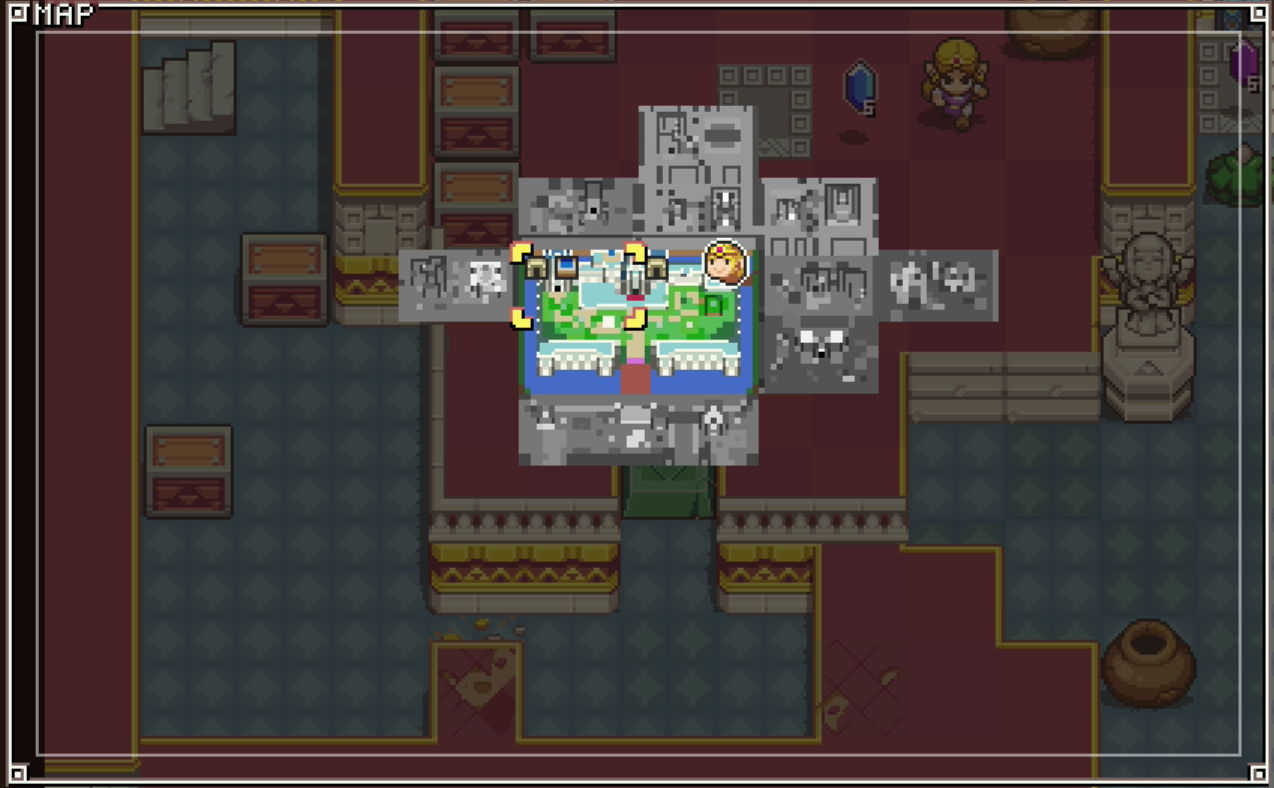 They can appear on any terrain except the beach.

In the grassland you’ll find a hill with a locked red chest on top. It will always have the Hover Boots.

Hover Boots are used to for all sorts of skips and strats. The main one being a Gear Skip.

These POIs will always have a key. The key will respawn after you clear a dungeon (except for the keymos key). So if there’s one close to a dungeon/sheikah stone, you can farm it for up to 5 keys. 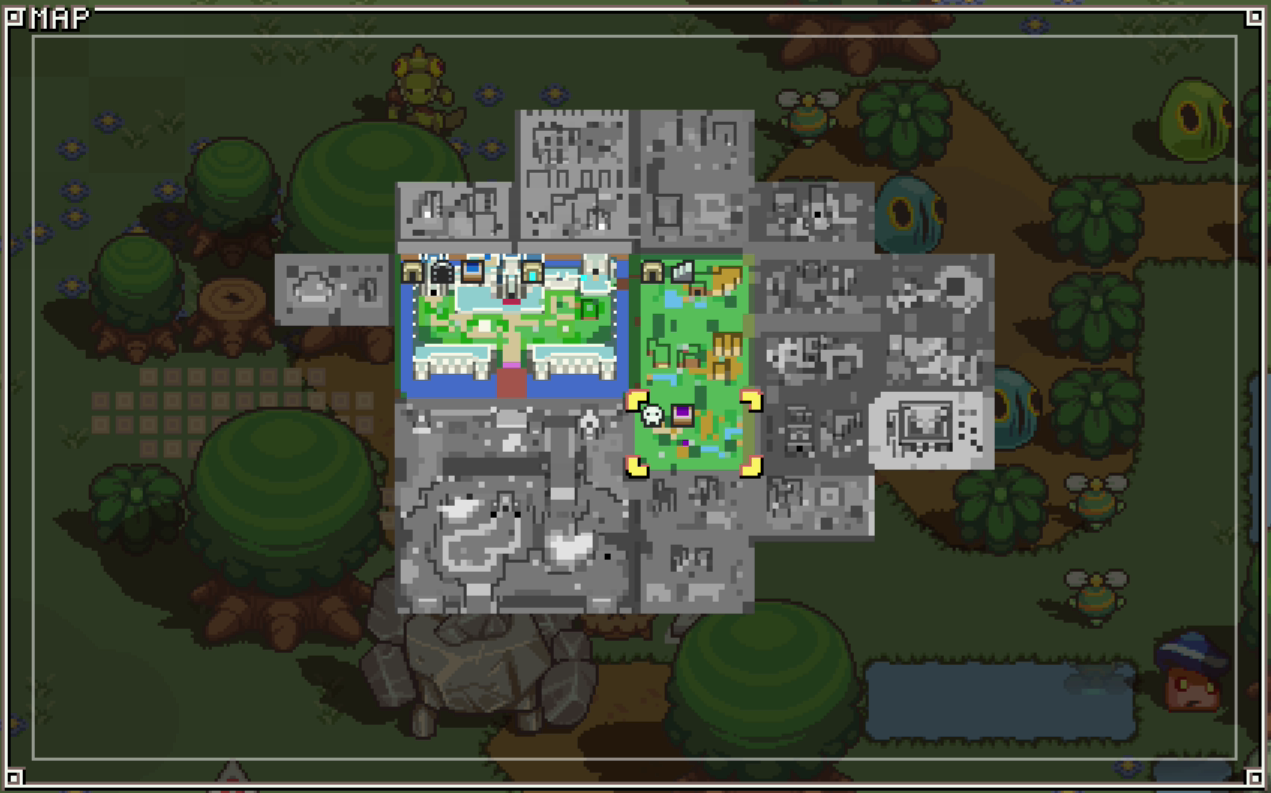 For this POI, you should sometimes keep in mind which side you approach it from, as the box-like shape with the key chest in it only has 1 entrance! Fortunately, it’s possible to tell where it is, as the chest (which is visible on the map) is always on the opposite side. 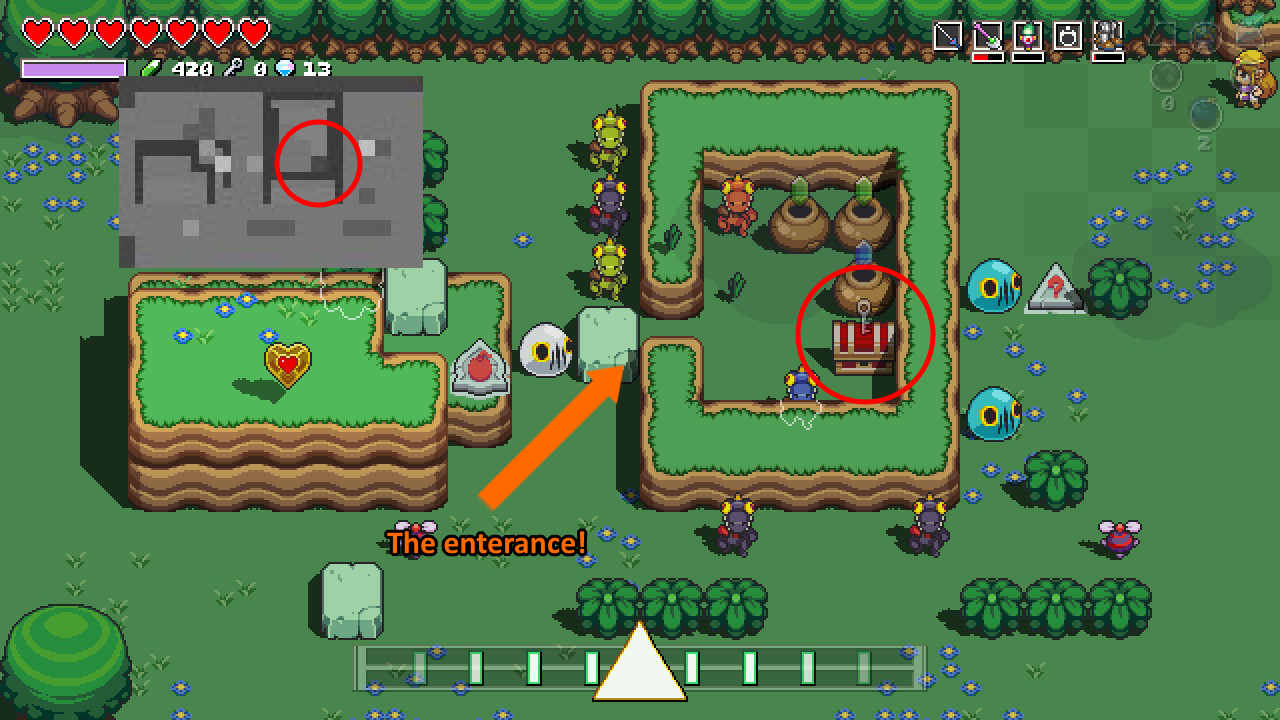 There’s a keymos that drops a key here! The dirt makes a pattern that looks like a key. BUT It doesn’t always look like a key. The floor is randomized between dirt and grass. So sometimes you can see it, and other times not so much. 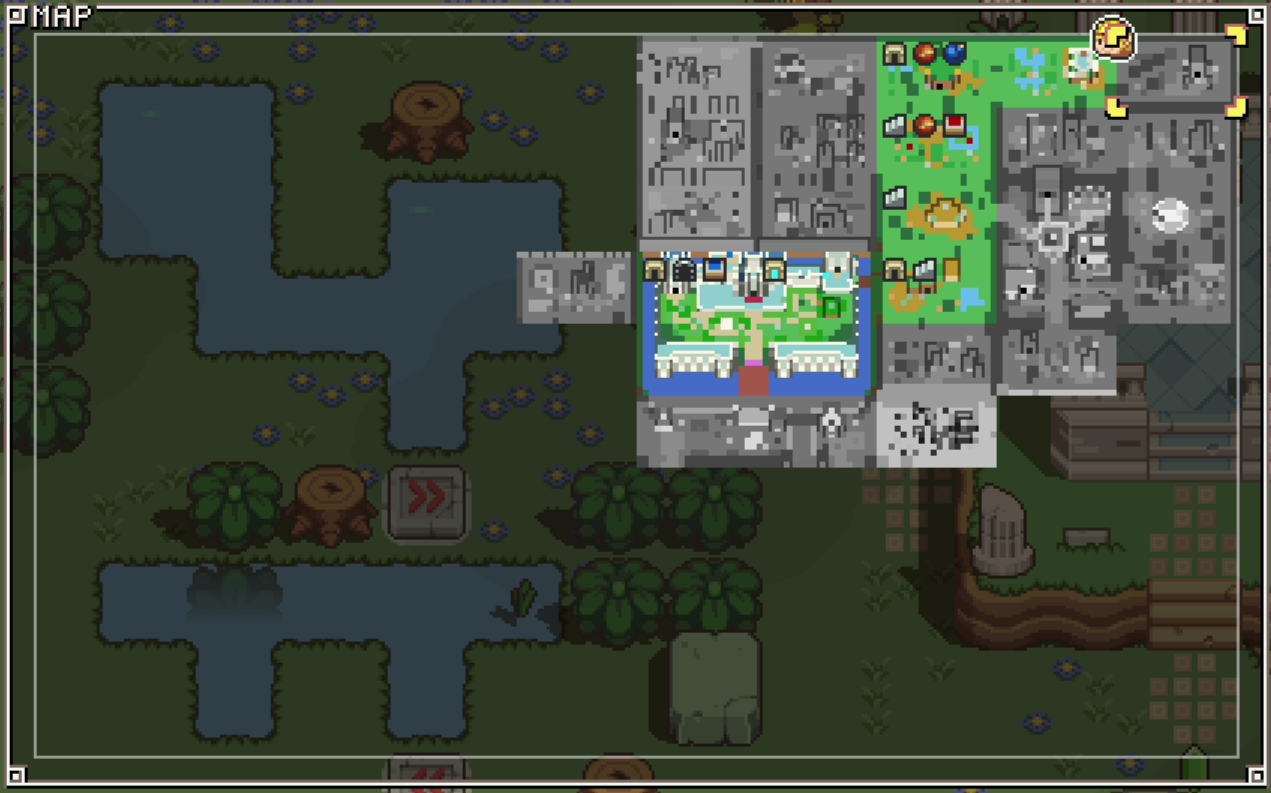 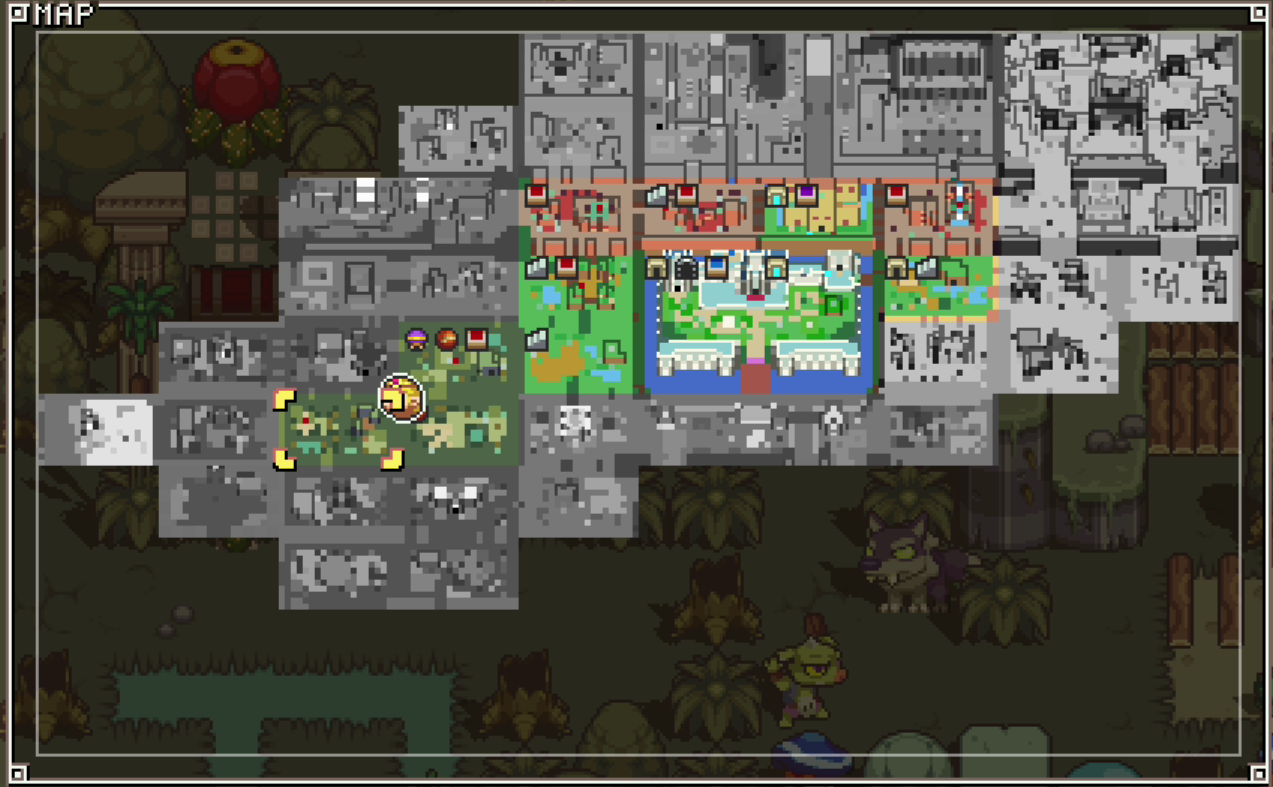 The beach keys are usually not that useful, since the beach is out of the way most of the time which makes getting them slow. But they can still help occasionally if they happen to be in a convenient location.
Note: both of the beach POIs can be mirrored. 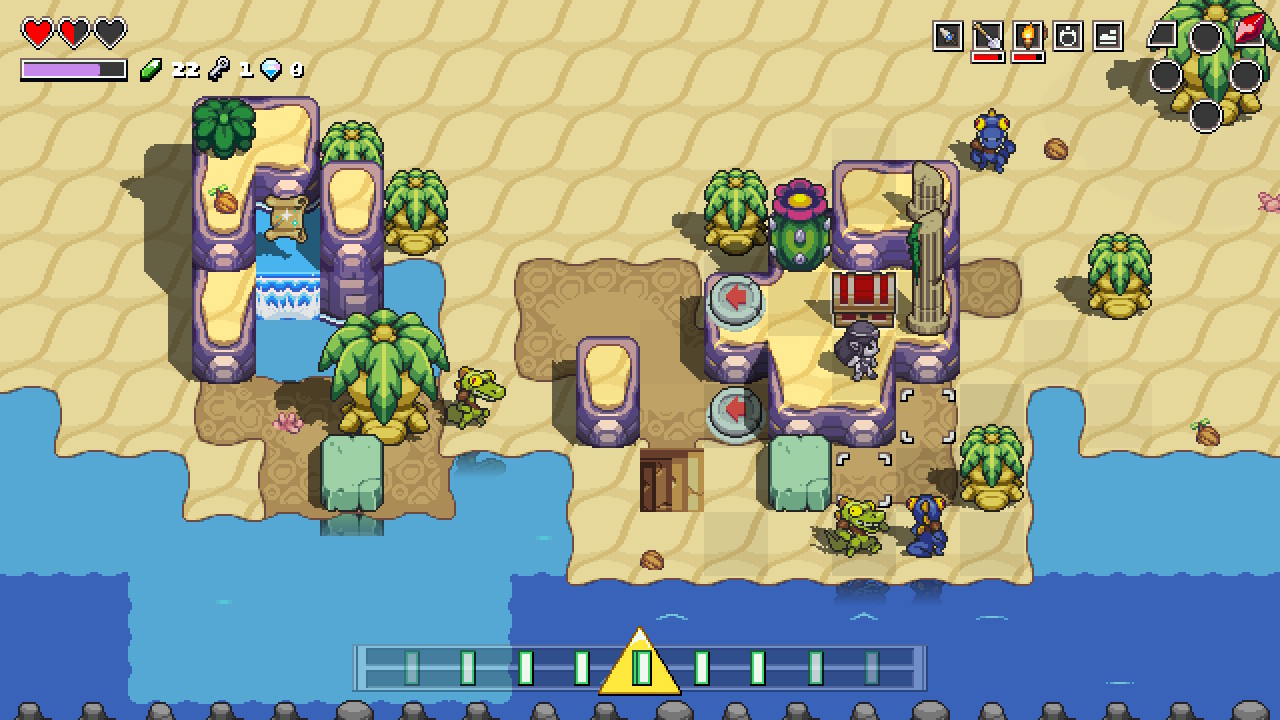 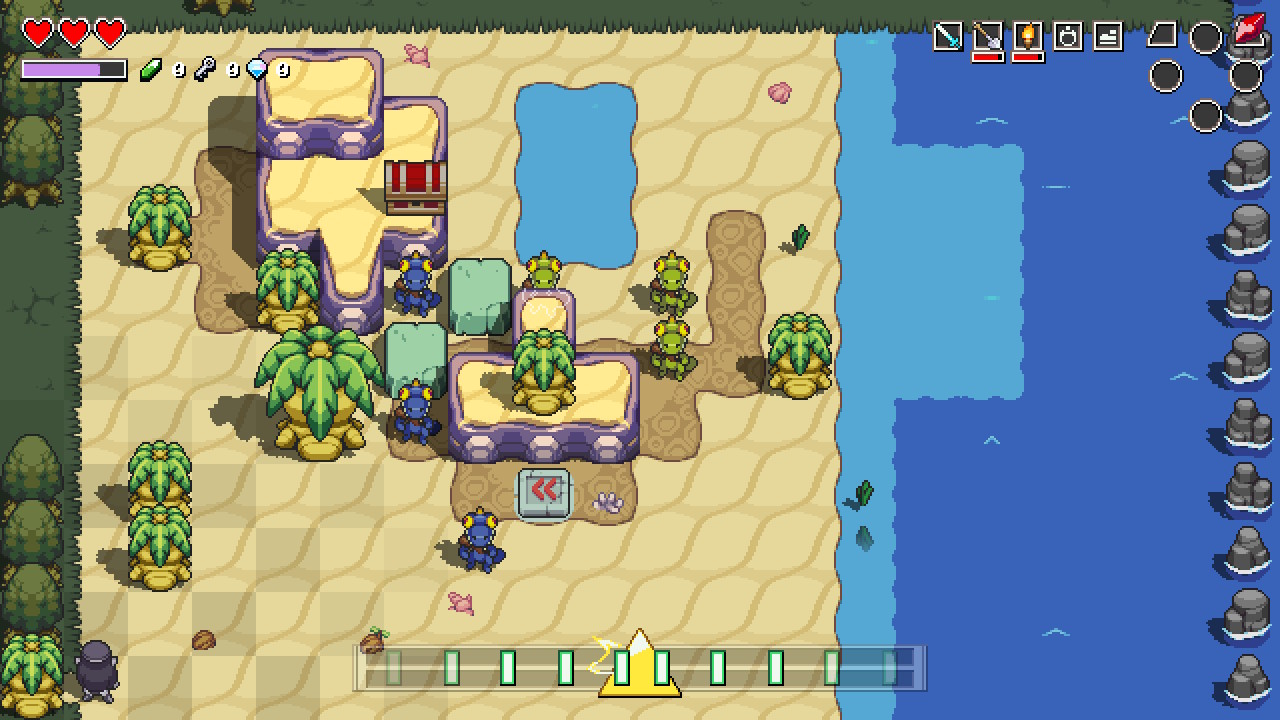 Both beach keys on the map 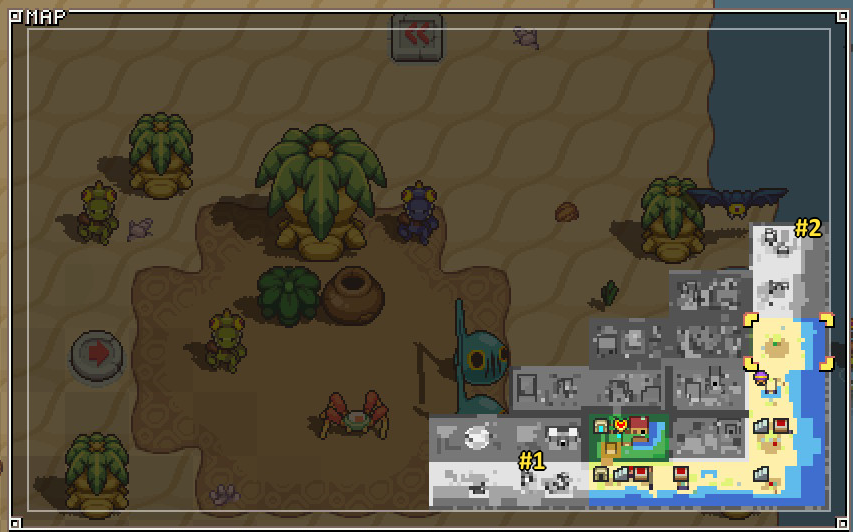